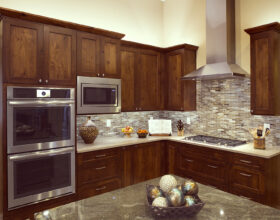 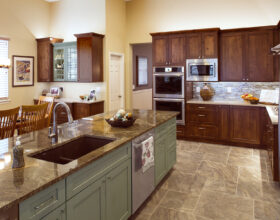 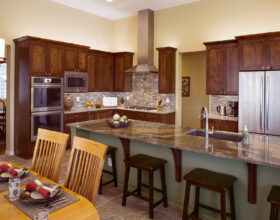 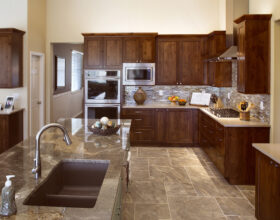 With the purchase of a newer, open-floor-plan style ranch, these homeowners quickly determined they had a different vision for the style of cabinetry in their home and began planning their kitchen remodel project shortly after taking possession.

A personal recommendation from friends put Showplace Cabinetry on top of their list for the project.

The hickory cabinets found in their new home just weren't to their liking, so they were removed and replaced with Showplace rustic alder on the perimeter and moss green painted cabinets with vintage brushing for their massive 12-foot island. Painting the island a complimentary green helped pull the colors out of the porcelain flooring they had installed prior to remodeling the kitchen itself.

Although the layout did not change much, an under counter wine fridge was added, appliances were changed to a cook-top with a stainless hood, and the oven and microwave were moved to the opposite end of the run. This helped open-up the kitchen when the couple wanted to participate in preparing the meals together.

A desk from the dining area was also removed and a new buffet was put in its place to provide extra storage.